1. Everettiana QM is simply quantum mechanics minus the collapse postulate: there is no dynamical principle in Nature beyond the continuous, linear, unitary and deterministic evolution of the Universal Wavefunction. Or in John Baez's memorable acronym, "Get CLUED up". However, physicists only began to understand the emergence of quasi-classical macroscopic “branches” describable by an approximation of classical Newtonian physics with the growth of the decoherence program pioneered by H. Dieter Zehb and Wojciech Zurekc. Today probably most physicists would accept decoherence solves the measurement problem for all practical purposes. Yet on the face of it, decoherence cannot by itself why single experimental observations have definite outcomesd: the notorious "collapse of the wave function". Only individual particles, not waves, are ever detected on a screen, with the probability of detection being the square of the amplitude of the wave, i.e. the Born Rule. The non-classical interference pattern revealed by a double-slit experiment becomes apparent only via the varying density of these individual particle hits on the screen. So what explains the apparent non-unitary transformation of the state vector at the time of measurement into a single definite state? Why does the superposition principle apparently break down?

The answer of this paper is that seeing a definite live cat or dead cat, or seeing a definite pointer reading, or seeing a particle hit on a screen exemplifies (sic) the superposition principle. There are no definite outcomes. Instead, there are superpositions of distributed neuronal feature-processors co-opted via selection pressure to play the functional role of phenomenally representing definite outcomes. Only the superposition principle allows what would otherwise be the pixels of experience of discrete neuronal feature-processors ("mind dust”) to be experienced as a definite classical pointer reading, or a definite classical cat, or a definite classical screen (etc) in one's world-simulation. By contrast, tough-minded positivist talk of “observers”, “observations” and “measurements” presupposes the theoretical baggage of an untenable perceptual naive realism. On the alternative “Schrödinger’s neurons” conjecture canvassed here, one’s entire classical macroscopic world-simulation consists of individual quantum coherent states, despite the insanely short sub-femtosecond duration of individual neuronal superpositions. Note that what is being conjectured here isn’t some exotic new principle of physics, but rather the significance to consciousness of what most physicists (and neuroscientists) would dismiss as a merely theoretical short-lived quantum effect of no conceivable relevance to phenomenal mind and the binding problem. 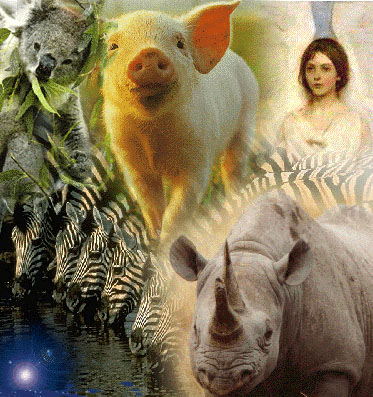